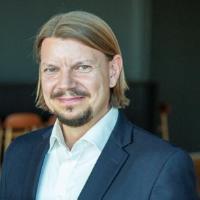 Jesper Olsen studied analytical chemistry in the group of Roman Zubarev at the University of Southern Denmark in Odense, and obtained his PhD in biochemistry and molecular biology in the laboratory of Matthias Mann. During his PhD he was involved in developing high-resolution mass spectrometry-based proteomics. He spent 4 years as a post-doctoral fellow at the Max Planck Institute for Biochemistry in Munich, where he developed a quantitative phosphoproteomics technology that was applied to global time-resolved analyses of cell signaling pathways in human cells. In 2009, Jesper was recruited back to Denmark to head a group at the newly established Novo Nordisk Foundation Center for Protein Research (CPR) at University of Copenhagen. In 2012, he was promoted to vice director of CPR and in 2014 full professor. Jesper has received a number of research awards including the Max Planck Institute for Biochemistry Junior Research Award and HUPO Young Investigator Award in Proteomic Sciences.