Researchers from the Nielsen group detail the human SUMO proteome

An emerging concept of modern biology relates to the systematic understanding of cellular networks co-regulated via post-translational modifications (PTMs). Hence, to better understand how cells function, researchers from the Nielsen group at CPR have mapped the human roadmap related to proteins modified with the small ubiquitin-like modifier (SUMO).

SUMOylation is a post-translational modification (PTM) analogous to ubiquitylation in terms of the enzymatic reaction cascade and types of enzymes used; however, instead of conjugating ubiquitin to target proteins SUMOylation involves the dynamic addition of SUMO.

SUMO has emerged as an essential modification that plays a crucial role in many biological processes in the nucleus of human cells, and is furthermore indispensable to all eukaryotic life. As a result, SUMOylation plays important roles in various human diseases including cancer, Alzheimer’s disease, Parkinson’s disease, Huntington’s disease, and ischemia. Consequently, the SUMO signaling pathway has emerged as a clinically relevant drug target; however, it has remained analytically challenging to obtain an accurate and global map of which proteins that specifically becomes modified by SUMO in human cells.

This map allowed the authors to better understand cellular processes surrounding SUMO and take the next step within the SUMO research field by establishing the distribution of SUMOylation across individual proteins. This provides researchers working on SUMO target proteins with valuable information regarding the specific abundances of each lysine residue modified by SUMO within the proteins of interest.

Moreover, using structural-predictive analyses the researchers find that SUMOylated lysine residues commonly reside in unstructured protein regions, in striking contrast to any other known lysine modification such as ubiquitylation, acetylation and methylation. 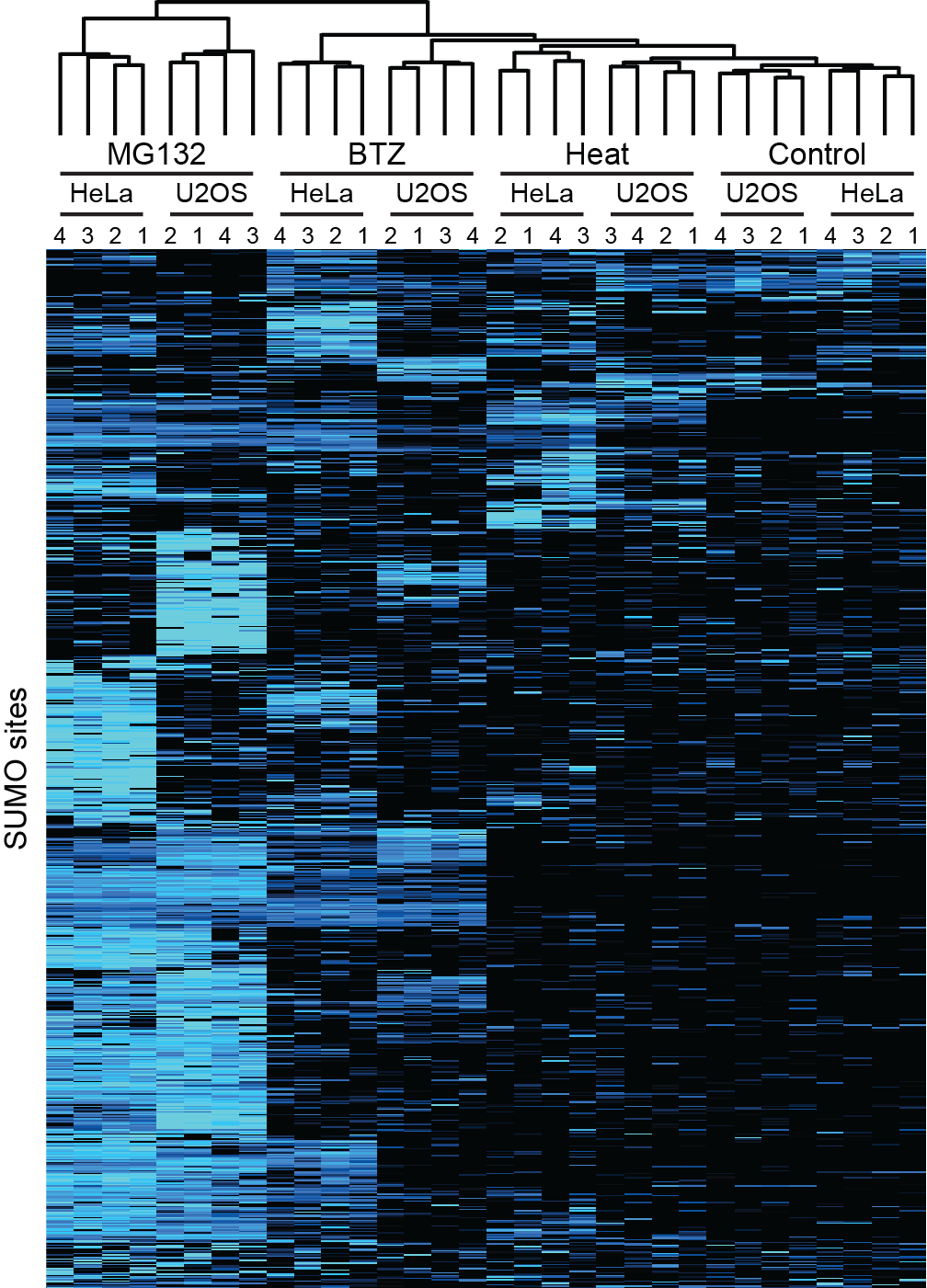 Besides describing proteins modified by SUMO, the researchers also investigated cellular cross-talk with other PTMs. They observed elaborate cross-modification between the various ubiquitin-like modifiers (UBLs), while discovering extensive co-modification between SUMO and phosphorylation (Figure 2).

Bioinformatics and proteomics analyses revealed SUMO modification events to be widely regulated in a manner dependent upon phosphorylation regulated by cyclin-dependent kinases (CDKs), demonstrating that phospho-dependent SUMOylation is involved in regulation of the cell cycle.

Collectively, the obtained data demonstrate that over 90% of all proteins integrated in nuclear protein complexes can become modified with SUMO, hereby detailing the SUMO proteome to unprecedented depth. The obtained data uncovers novel insights into the cellular functions of SUMO, and provides critical knowledge into human SUMO biology that undoubtedly will provide new opportunities for therapeutic strategies targeting the SUMOylation network in health and disease. 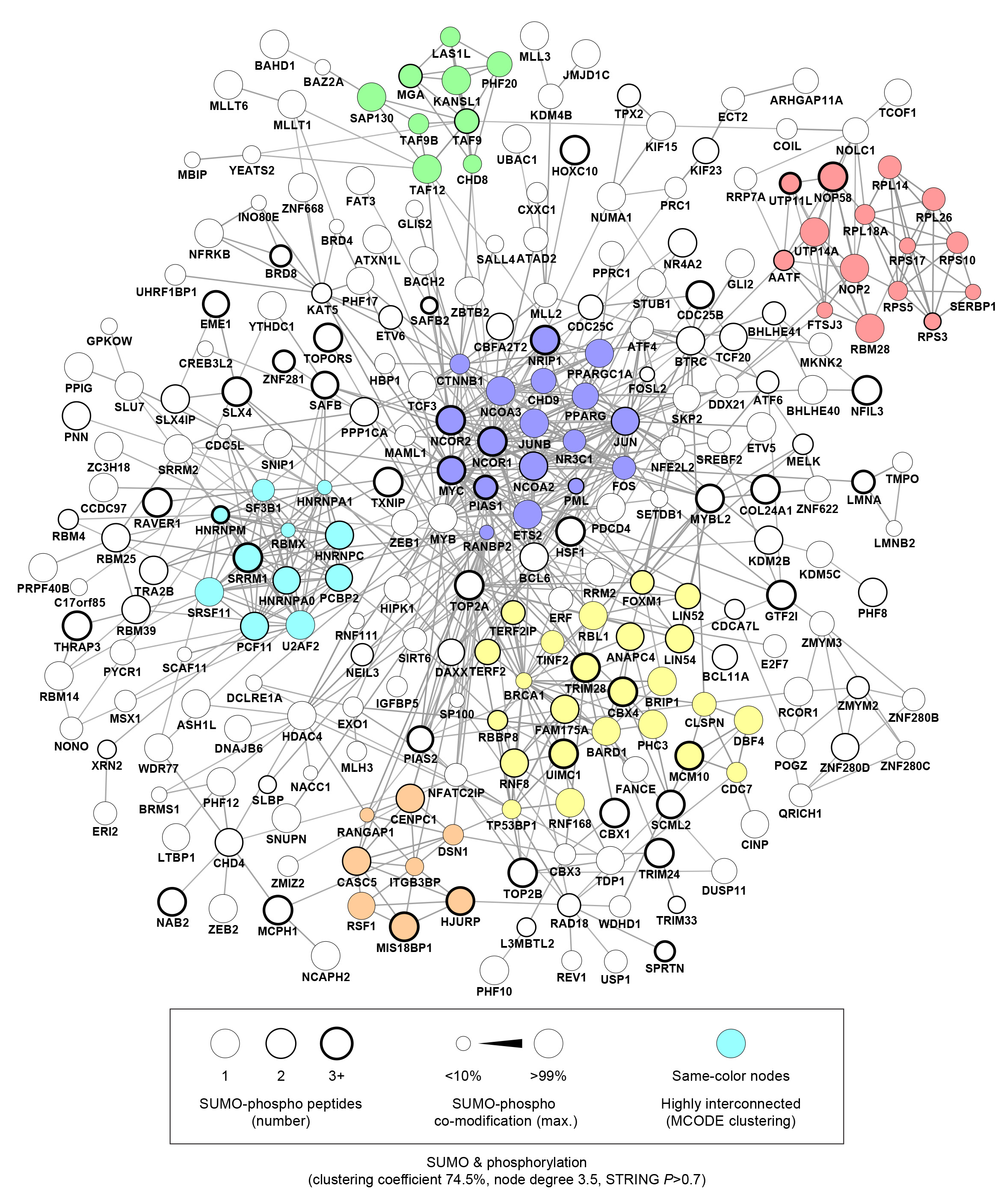