A phosphorylation switch protects the genome during cell division

A phosphorylation switch protects the genome during cell division

The ability to correctly pass on the genetic material to new cells is essential for life. Failure to do so is the cause of human whole chromosome diseases and contributes to the development of cancer. The molecular mechanisms ensuring accurate chromosome segregation during cell division is still to be dissected but research from the Nilsson lab has now uncovered an essential phosphorylation switch regulating this process. 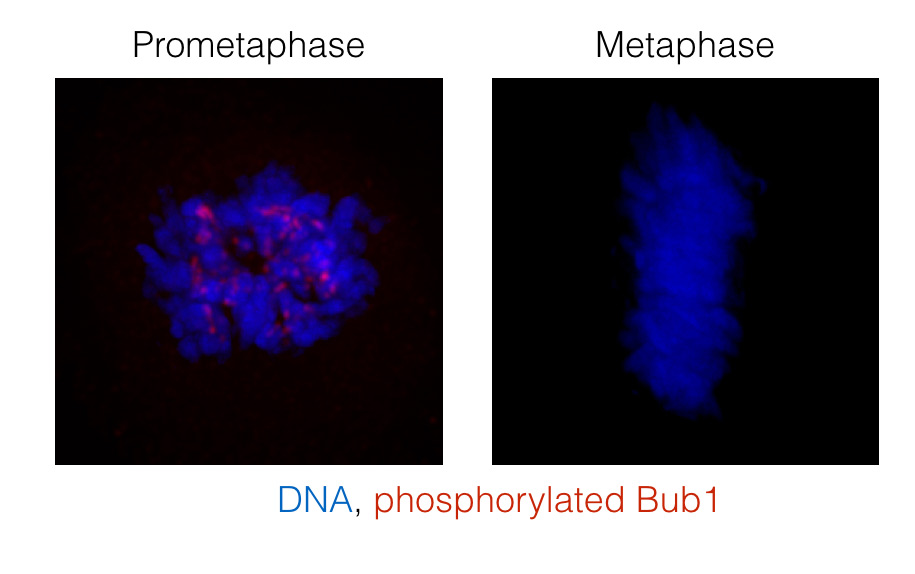 Gang Zhang from the Nilsson group has been investigating the spindle assembly checkpoint in human cells and how it controls the timing of chromosome segregation. In particularly he has focused on understanding how the checkpoint protein Mad1 localized to kinetochores, large protein structures on chromosomes that bind to microtubules. It is known that Mad1 localization is important for checkpoint function but the underlying protein-protein interactions and their regulation have not been uncovered.

In collaboration with the Nielsen lab at CPR the researchers used an in vivo proximity dependent biotinylation approach coupled with mass spectrometry to identify Mad1 interactors. This revealed a so far elusive interaction with the Bub1 checkpoint protein that the researchers further characterized. Interestingly the binding of Mad1 and Bub1 required the phosphorylation of Bub1 by mitotic kinases and a novel generated phospho-specific antibody revealed that Bub1 was specifically phosphorylated on unattached kinetochores. This result explains how Mad1 is exclusively recruited to unattached kinetochores by Bub1 and suggests that a balance of mitotic kinases and protein phosphatases play an important role in establishing a rapid switch that can turn on and off the checkpoint. As the phosphorylation sites and surrounding sequence is conserved to yeast it suggests that this phosphorylation switch has been conserved through almost 1 billion years of evolution and constitutes an ancient safeguard mechanism for the genome. The researches are now exploring how the phosphorylation-switch is regulated and how mammalian specific checkpoint proteins have evolved to integrate the status of this phosphorylation-switch with their activity. Nature Communications, 2017, 8: 15822