To understand how our cells prevent the harmful consequences of genetic changes, researchers from the Mailand group at CPR generated a roadmap of the cellular proteins that are associated with damaged DNA. From this they discovered a new human protein with an important role in activating protective cellular responses to replication stress, a major source of chromosomal instability and life-threatening diseases such as cancer. These findings may provide new opportunities for promising current therapeutic strategies that target replication stress in cancer cells.


The precise duplication of cellular DNA (referred to as DNA replication) during each cell division cycle is vital for the transmission of genetic information and for the fitness and survival of cells and organisms. However, the integrity of the DNA replication process is constantly put in danger by endogenous and exogenous insults that compromise the stability and progression of the cellular DNA replication machinery. This leads to a potentially deleterious condition generally referred to as replication stress, a major driver of genomic instability that may lead to cancer and other severe pathologies. To mitigate this threat, cells possess dedicated responses that actively counteract the adverse effects of replication stress and ensure the faithful copying of DNA even in the face of such challenging conditions.

The ATR kinase is the cell’s master organizer of the response to replication stress. Upon replication stress, ATR becomes activated and phosphorylates numerous cellular substrates to set in motion a multifaceted response that collectively acts to protect and limit ongoing DNA replication until the stress has been resolved. Stimulation of ATR kinase activity relies on a complex, but relatively well understood, molecular mechanism by which ATR and its binding partner ATRIP is recruited to Replication Protein A (RPA)-coated ssDNA regions generated upon replication stress (see Figure). This brings ATR-ATRIP into proximity of the TopBP1 protein, which contains an ATR-activating domain (AAD) that directly stimulates ATR kinase activity. While the importance of this pathway for activating ATR is firmly established, a new study from the Mailand lab at CPR in Nature Cell Biology revealed that surprisingly, ATR activation in human cells is not exclusive to TopBP1, but that a hitherto uncharacterized protein, ETAA1, also contains an ATR-activating domain and promotes ATR activation in parallel with, but independent of, the canonical TopBP1-mediated pathway (See figure). 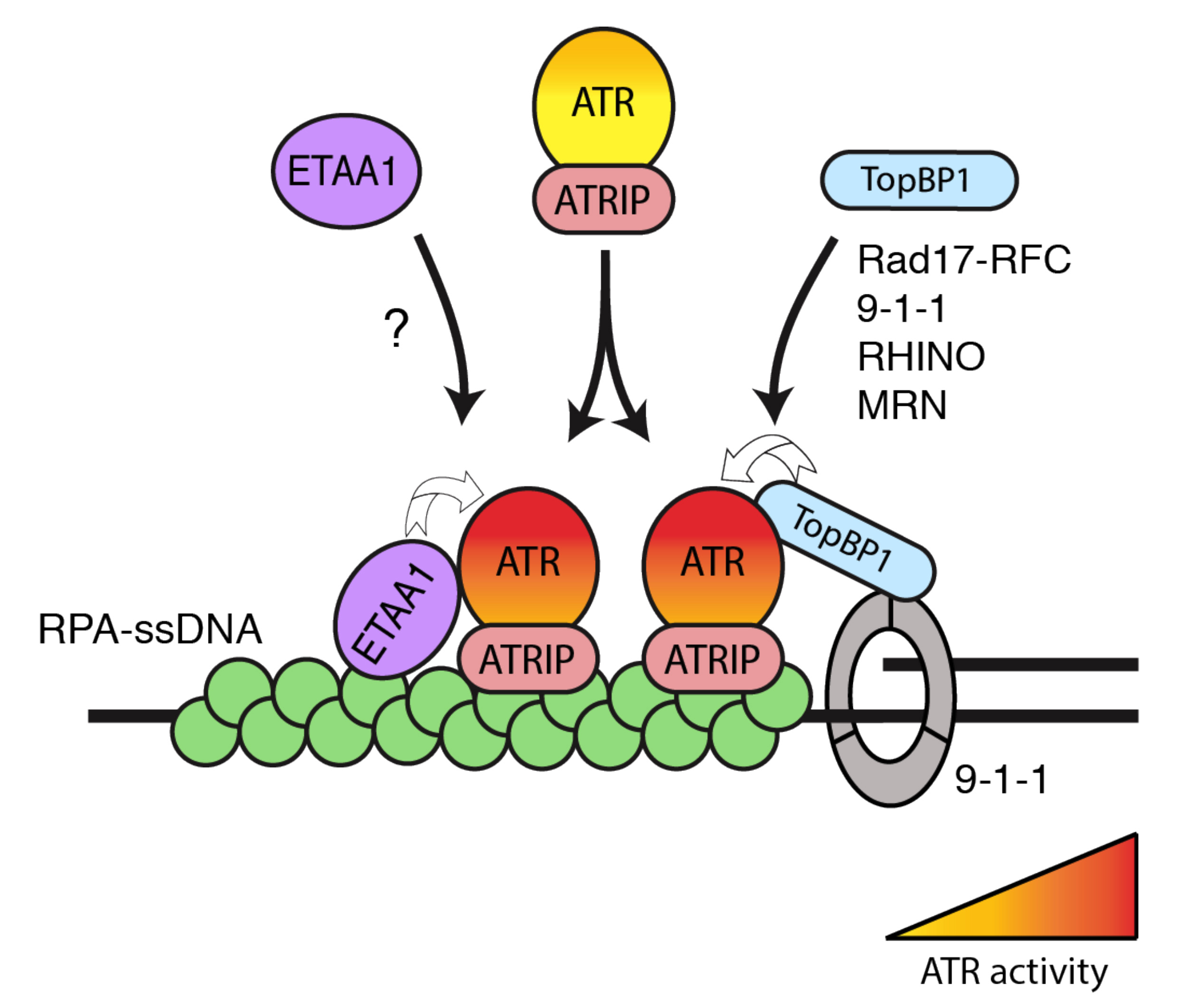 The protein ETAA1 defines a new mechanism of ATR kinase activation upon replication stress (left), operating in parallel with but independent of the canonical TopBP1-mediated ATR activation pathway (right).

The researchers discovered the new protein through the use of a powerful mass spectrometry-based method that enabled them to map all the cellular proteins acting directly in the context of damaged DNA. Subsequently, they found that ETAA1 promotes ATR activation through a combination of RPA-binding and ATR-activating domains, and its ablation disrupts the integrity of the DNA replication programme, sensitizes cells to replication stress and is synthetic lethal with TopBP1 depletion, caused by abrogation of ATR-mediated signaling and massive genomic instability. Thus, ATR activation in human cells relies on dual TopBP1- and ETAA1-mediated pathways whose combined action is essential for coping with replication stress.

“Our discovery opens up a whole new chapter in the understanding of the molecular framework underlying the activation of genome-protective ATR-driven responses, which could offer exciting new opportunities for current promising efforts aimed at exploiting therapeutically the burden of replication stress facing cancer cells”, says professor Niels Mailand (CPR), lead author on the new study.

Read the full article in Nature Cell Biology: Activation of the ATR kinase by the RPA-binding protein ETAA1