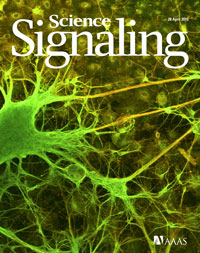 Researchers from the Olsen group at Novo Nordisk Foundation Center for Protein Research (CPR) has, in collaboration with researchers from the Disease Systems Biology program also from CPR and with international partners in the EU collaborative network ASSET (Analyzing and Striking the Sensitivities of Embryonal Tumors), published a comprehensive proteomics analysis on nerve growth factor (NGF) signaling dynamics in neuroblastoma cells.

Neuroblastoma, an embryonal tumor, arises from cells of the developing sympathetic nervous system and is the most common extracranial tumor in childhood. Intriguingly, many tumors are prone to spontaneous regression or they differentiate into a more benign state rendering patients off therapy. These favorable biological characteristics are associated to NGF signaling via its high-affinity receptor – the TrkA receptor tyrosine kinase. The published work addresses the global and proteome-wide changes in NGF-TrkA signaling dynamic underlying the favorable patient phenotype using a neuroblastoma cell culture model system. Signaling activation elicits neurite outgrowth in neuroblastoma cells, a hallmark of neuronal differentiation. Dynamics of NGF-TrkA signaling was explored by a quantitative mass spectrometry-based approach. Besides characterizing three unique layers of signaling information (the interactome, the phosphoproteome and the proteome) spanning 5 minutes – 48 hours of duration, the study led to the identification of an inhibitory E3 ubiquitin ligase. 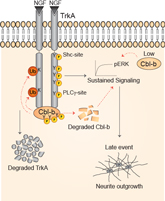 Emdal et al. performed a temporal analysis by mass spectrometry of changes in the proteome in response to NGF in neuroblastoma cells. They found that NGF not only activated TrkA, but also signaled its degradation by promoting the interaction of TrkA with the E3 ubiquitin ligase Cbl-b, which resulted in the ubiquitylation and degradation of both proteins. Neuroblastoma cells with reduced Cbl-b levels had increased TrkA signaling and produced longer neurites. In addition to identifying this inhibitory role for Cbl-b, the proteomic data are a resource for further investigation of TrkA signaling dynamics.