In an advance online publication, researchers from Novo Nordisk Foundation Center for Protein Research and University of Zurich shed light on the mechanism behind the shutdown of ribosomal RNA synthesis that is observed upon DNA damage.

The researchers demonstrate that when chromosomal double-strand breaks occur upon X-ray irradiation of human cells, the protein NBS1 translocates into the nucleoli where its accumulation leads to global inhibition of rRNA transcription. The mechanism depends on direct interaction of NBS1 with Treacle, a nucleolar protein involved in ribosome biogenesis. Together, the NBS1 and Treacle proteins constitute a genome surveillance complex providing trans-compartmental communication between sites of double-strand breaks and the rRNA transcription machinery, leading to inhibition of RNA Polymerase I. The resulting rRNA silencing is probably an important protective means to maintain genome integrity in the face of DNA damaging agents, thus protecting an individual against cancer and other diseases characterized by unstable genomes. 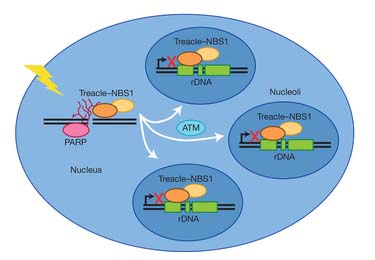 Model of Treacle-NBS1-mediated trans-compartmental communication between sites of DNA breaks and the nucleoli.