Failure in the segregation of chromosomes during mitosis results in aneuploidy that is a hallmark of solid tumors and complicates treatment in the clinic. Understanding the underlying molecular mechanisms ensuring accurate chromosome segregation is thus of importance. The proper distribution of the chromosomes during mitosis depends on a functional spindle assembly checkpoint (SAC). The SAC delays cells in mitosis until all chromosomes have aligned on the metaphase plate by inhibiting the protein machinery required for mitotic exit. More than two decades ago the fundamental core components of the checkpoint was identified in yeast including the conserved Mad1-Mad2 complex. 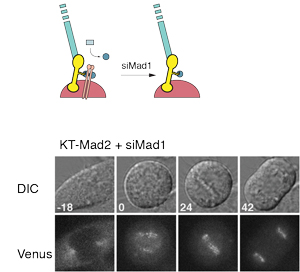 Work from the Nilsson lab and researches at the center now provide novel insight into the role of the Mad1-Mad2 complex during cell division. Using advanced imaging techniques and artificially bypassing the role of the Mad1 protein in recruiting Mad2 to kinetochores it is demonstrated that Mad1 has additional unexpected roles in SAC signaling. This new role of Mad1 depends on a conserved globular domain and the function of this is now an important future goal.

Title: A direct role of Mad1 in the Spindle Assembly Checkpoint beyond Mad2 kinetochore recruitment

Link to article in EMBO reports