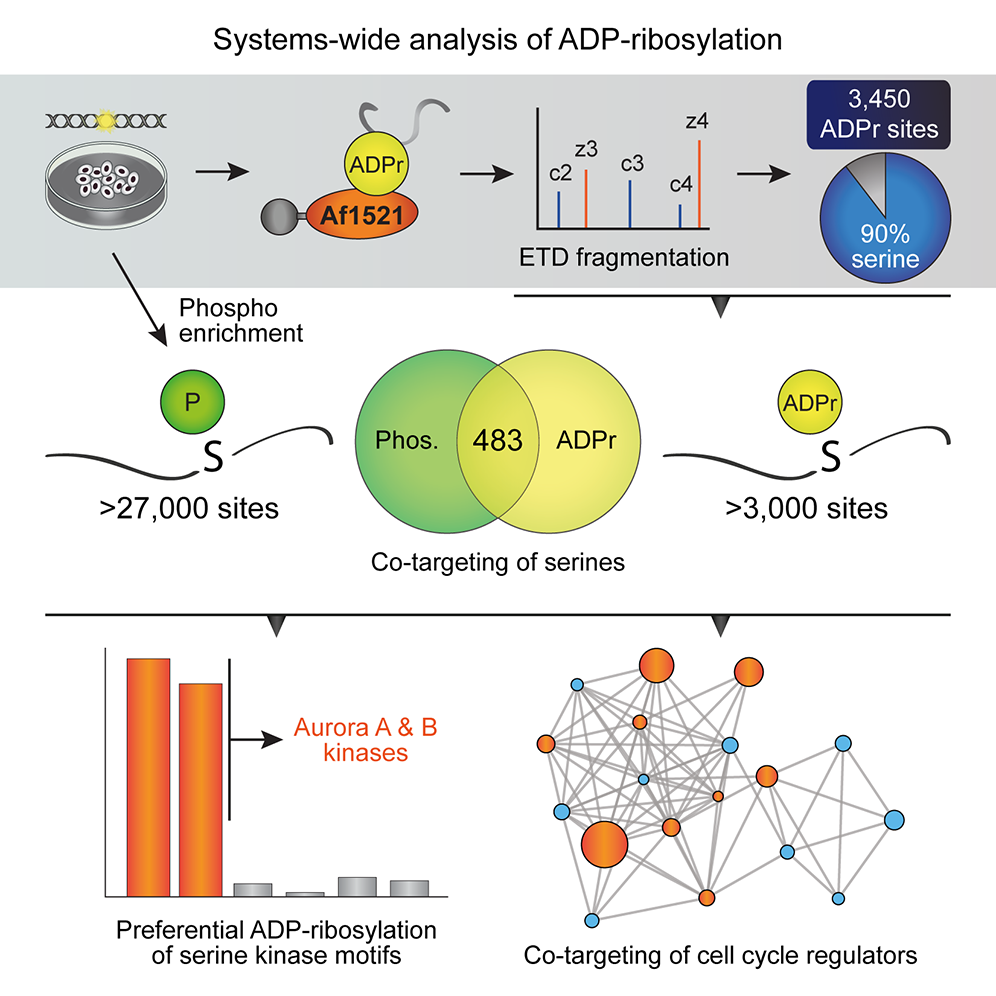 ADP-ribosylation is a post-translational modification that plays an important role in several signaling pathways, including the DNA damage response. ADP-ribosylation is catalyzed by a family of enzymes known as poly (ADP-ribose) polymerases (PARPs).

Due to the essential role of ADP-ribosylation in DNA damage repair, pharmacological inhibitors of the PARP enzymes, referred to as PARP inhibitors, are widely used in cancer therapy for treatment of ovarian, breast, and prostate cancer. In addition, PARP inhibitors are explored as potential treatment for acute life-threatening diseases, such as stroke and myocardial infarction, as well as for long-term neurodegenerative diseases. However, despite the broad clinical impact of PARP inhibitors, the molecular mechanisms surrounding inhibition of the PARP enzymes and their effect on ADP-ribosylation in human cells remain unknown.

“We still have a lot to learn about Serine ADP-ribosylation, but we are convinced that the medical implications of the modification in cancer, infections and neurodegenerative diseases might be enormous," says Professor Michael L. Nielsen.

This discovery details the cellular response to the clinical PARP inhibitor Olaparib at the systems biology level, while simultaneously showing which proteins are modified by serine ADP-ribosylation. 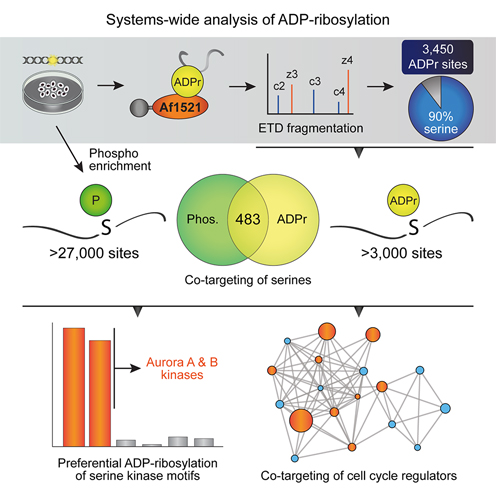 Potential unexplored clinical advantages
Beyond this, the researchers find that a significant degree of identified serine ADP-ribosylation sites are also frequently targeted by serine phosphorylation in the DNA damage response. This provides novel evidence for the occurrence of site-specific cross-talk between the two modifications. Specifically, they find that co-targeted serine residues are often phosphorylated by the Aurora kinases. Aurora kinases are known to associate with sensitivity to PARP inhibitors, suggesting a regulatory link between these kinases and the PARP enzymes. With Aurora kinase inhibitors and PARP inhibitors both developed for the treatment of ovarian and breast cancer, the observations made by the Nielsen group advocate their combined usage might entail currently unexplored clinical advantages.

Collectively, the Nielsen group finds that serine ADP-ribosylation is a widespread modification in human cells, with a regulatory scope comparable to other common modifications. Moreover, the study provides new insights into the cellular implications of PARP inhibitors commonly used in clinical cancer treatments.

The study is funded by the Novo Nordisk Foundation, the Danish Council for Independent Research, and the European Molecular Biology Organization.

The study ‘System-wide analysis of Serine ADP-ribosylation Reveals Widespread occurrence and Site-specific overlap with phosphorylation’ can be read in Cell Reports.