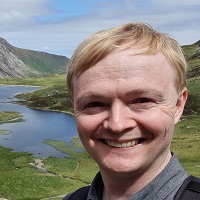 Having joined the Mailand lab in September 2022, my aim is to combine in house expertise in the study of the DNA damage response, as well as the role of ubiquitin and ubiquitin-like post translational modifications of proteins, with my expertise in the study of human cytomegalovirus (HCMV). Viruses are masters of cell biology, and so by studying how the virus hijacks and manipulates cellular processes, not only can we better understand the virus, but we can also glean insights into basic cellular processes.

HCMV is a ubiquitous pathogen, with approximately 80% of adults worldwide infected by this virus. As a member of the herpesvirus family, which includes close relatives such as Epstein-Barr virus and Varicella-Zoster Virus (also known as Chickenpox), once an individual is infected, they are infected for life. The virus remains within the host, in the case of HCMV in CD34+ haemateopoietic stem cells, in a 'latent' state, in which the virus is mostly silent, but is manipulating the cellular environment such that when the cells differentiate, it is ready to reactivate and produce infectious progeny.

Fortunately, most healthy individuals suffer no direct health consequences as a result of HCMV infection, and likely will not realise they are infected. Longterm infection with HCMV is thought to reduce your immune system's ability to respond to new infections, and is associated with a reduction in vaccine efficacy in aging populations. However, if someone is not immunocompetent, HCMV can have a much more severe impact. Transplant patients, who are deliberately immunosuppressed in order to prevent rejection of the donor organ or stem cells, can suffer severe CMV disease as a result of reactivation of their own HCMV infection, or as a result of primary infection by the donor organ (e.g. if a seronegative, uninfected patient recieves an organ from a seropositive, HCMV-infected person). Genetic immunodeficiencies also often present as repeated, severe herpesvirus infections, including HCMV.

Whilst antivirals do exist, they have a range of toxic side effects and resistance is known to emerge. However, their use in an extremely important patient group is particular limited, namely the developing fetus or newborn. HCMV is capable of being passed from pregnant parent to the fetus in utero, at which stage the fetal immune system is poorly developed. Whilst this is fortunately quite a rare event (approximately 1 in 200 children born are positive for HCMV), 20% of these infected children will suffer neurological damage, with HCMV being the leading infectious cause of hearing loss, as well as capable of causing intellectual disability, seizures and microcephaly. That equates to approximately 4,100 children affected per year in the EU alone. HCMV pathogenesis and interaction with neuronal cells is relatively poorly understood, and there is consequentially a pressing need for further research into this area.